Life in the Shipping Lane

The Soo Locks
The Soo Locks, located between the two Soos on the north and south sides of the river, allow ships to travel between Lake Superior and the lower Great Lakes. The locks pass an average of 10,000 ships per year. This is achieved in spite of the locks' being closed during the winter, from January through March, when ice shuts down shipping on the Great Lakes. The winter is used to inspect and maintain the locks.

The locks bypass the rapids of the St. Marys River where the water falls 7 meters (21 feet) from Lake Superior. Sault Ste. Marie (pronounced Soo Saint Ma-ree) gives its name to both the Canadian and U.S. cities at the site, in Ontario and Michigan, respectively. The Sault Ste. Marie International Bridge between the United States and Canada permits vehicular traffic to pass over the locks. There are two bridges crossing the River. The Sault Ste. Marie International Bridge, a steel truss arch bridge takes road traffic across the river. Directly to the west is the Sault St. Marie International Railroad Bridge which carries rail traffic on a single set of tracks. The U.S. locks form part of a 1.6 mile (2.6 km) canal formally named the St. Marys Falls Canal. They are owned and maintained by the United States Army Corps of Engineers.
The first of the U.S. Soo Locks were completed in May 1855 by Erastus Corning's St. Mary's Falls Ship Canal Company, and is known as the American Lock. Competitive pressure led to the construction of a Canadian Lock in 1895. The locks were made a part of the Great Lakes Waterway system in 1959 known as the Soo Locks. 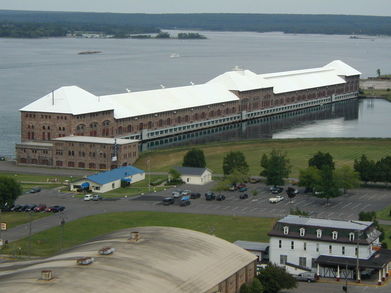 Hydroelectric Power
Hydroelectric power is a significant by-product of the St. Mary’s River. The Edison Sault Electric Hydroelectric Plant, located at the eastern end of the Sault Ste. Marie, Michigan Power Canal which runs through the city south of the American locks, is the longest hydroelectric plant in the world at 1,340 ft (408.4 m) in length. The plant consists of 74 three-phase generators capable of generating 25 to 30 MW. It was completed in 1902, and consists mostly of the stone left over from the excavation of the Sault Ste. Marie Power Canal. The Power Canal is used to power the Edison Sault Electric Hydroelectric Plant at its eastern end. The canal separated downtown Sault Ste. Marie, Michigan from the mainland making it an island. It was begun in September 1898 as the Michigan Lake Superior Power Company Canal, but completed by Edison Sault Electric Company in June 1902. Measured from its headgates to its end at the power plant, is is 2.25 mi (3.6 km) in length, between 200 ft (61 m) and 220 ft (67 m) wide, and 24 ft (7.3 m) deep. The water runs down the canal at speeds upwards of 7 MPH. The United States Army Corps of Engineers owns and operates a hydroelectric generating plant directly north of the American locks. Finally, the Francis H. Clergue Generating Station, owned and operated by Brookfield Renewable Energy, Inc., is a hydroelectric generating plant located directly north of the Canadian lock with a generating capacity of 52 MW. It was completed in 1981.
You may see a few of these giant vessels while traveling along the shoreline while driving on M1-34, waiting for the ferry, or ​even cruise  next to one as you cross the St. Mary's River aboard the Drummond Island Ferry.
© COPYRIGHT 2017-2020.  ALL RIGHTS RESERVED.